Diagram of electrical connection back and forth 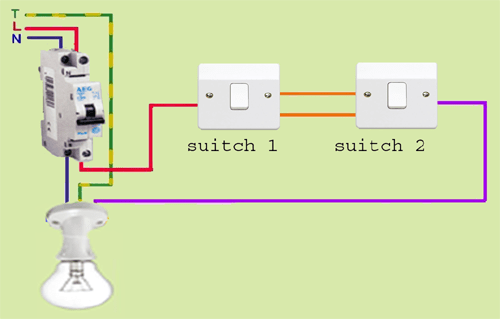 A back-and-forth circuit is an electrical circuit which makes it possible to switch off or switch on a light or any other electrical appliance from two switches, for example a switch at each end of a corridor for the same light lighting

The principle of the switch back and forth is to be able to control the switching on and off of one or more lamps in the same room from different locations. It is not the switch itself that is said back and forth but the electrical assembly.

It is designed to be able to control the same circuit from two separate switches.
This device is recommended for corridors or rooms with multiple entrances.

Carry out a back and forth in electricity

The device used is the same as for the switch. Only the connection of the phase wire changes: it goes from terminal 1 to terminal L. Terminals 1 and 2 are intended for shuttle wires (purple). To control light points from more than two different places, you must use impulse switches.

Wireless alternative: ultra-simple the installation of a remote switch for small home automation without a wired installation will be of great service to handymen in a hurry!

How to add a switch on a two-way switch?

In this case, one of the two back and forth is suppressed. It is at the level of the suppressed back and forth that we must intervene. The latter has three threads, two of which are of the same color. You must connect one of these two wires to the third, isolate the remaining wire, and install the whole in a box.

Here are the steps to make a simple two-way switch: There are 3 wires, 2 of which are of the same color: isolate 1 and combine the second with the one of a different color. One of the two switches will remain in place “for the decoration”, it is at the level of this switch that it is necessary to intervene.

The second switch will remain operational without modifications. In this case, one of the two back and forth is suppressed. It is at the level of the suppressed back and forth that we must intervene. How to connect a two-way switch with indicator light.

The assembly of a two-way switch with indicator light (exists under the Legrand brand, our photo) does not differ fundamentally from that of a classic two-way switch. Wiring without neutral has the advantage of being easy to install during renovations.

Connect a two-way switch: know everything

Connecting a two-way switch allows you to take advantage of a very practical lighting system. The principle is simple, it is the same electrical circuit which, connected to two or more switches, is used to control a light point.

This may be : The main lighting of a room spotlights, ceiling light, suspension, wall lamp.  An outlet, or two at the most, to which a floor lamp or a lamp is plugged, for example The various switches of a two-way circuit are linked together.

When to plug in a two-way switch?

Connecting a two-way switch becomes very useful when a surface is large and has several openings (corridors, doors, etc.). Offering an appreciable time saver, the two-way switch eliminates the need to cross the room to turn off or turn on the lighting system.

Thanks to the different switches available, the light can be controlled from different places.

The rooms where it is useful

The main room is usually the first thing you think of when you need to hook up a two-way switch. However, we can also opt for this type of electrical circuit in: The kitchen, The rooms, Corridors, The garage, The cellar.

Whenever a room has multiple inputs, it is a good idea to plug in a two-way switch. This avoids unnecessary trips to the switch.

The difference with a standard connection

The one-touch switch allows standard electrical connection. The two wires of the push button switch are then connected to the dedicated terminals, one being neutral, the other phase.

In addition to that, shuttles, orange in color, will have to make the junction between the two switches of the two-way circuit.

To connect a two-way switch, you have to pay attention to the color of the electric wires. These will have to be placed in the terminals provided, at the light source and switches.

the phase is usually red, the neutral is blue, while the earth is green and yellow. The electric wires of the shuttles are orange or brown. All cables used must be 1.5 mm in section.

On most switches available on the market, you must connect the phase wire to terminal L. The two shuttle wires are to be connected to terminals 1 and 2 of the first switch.

For the second, only the connection of the phase changes. The latter must then be connected to the light source.

On the electrical panel, the circuit breaker used to supply the light point where the two-way switch is connected must be of a minimum rating of 10A. This is imposed by the electrical standard in force.

The different types of installations

Connecting a back-and-forth by bleeding consists of making a bleeding in the wall to connect the two switches between them. This technique is the longest and most demanding in terms of work.

Finally, you have to redecorate the wall, with paint, wallpaper or other.

The surface connection allows a two-way switch to be connected without carrying out major work. For this, we will use troughs or hollow baseboards which will hide the electric wires placed directly against the wall.

For even less work, just plug in a wireless two-way switch. This method uses switches that operate using radio waves or infrared, in the case of a home installation.

However, even if the switches communicate with each other wirelessly, they still need to be connected to the phase for one and to the light point for the other.
Installation: precautions to take

Who can hook up a back and forth?

A skilled handyman is able to connect a two-way switch. However, for security reasons, it is best to call in a professional. The latter can proceed with the installation while respecting the electrical standard in force.

Comply with the electrical standard

Compliance with the standard is essential. To connect a two-way switch, make sure, among other things, that: The light point is equipped with a DCL base Maximum two outlets are controlled by the two-way switch

Connecting a two-way switch complies with the NFC 15-100 standard. In a bathroom, it should be placed in the authorised volumes, while outside, specific safety standards also surround the two-way connection.

Plugging in a two-way switch is a convenient way to use home lighting systems. To save money on your electricity bills, don’t hesitate to subscribe to TotalEnergies. Between 2 and 10% cheaper than regulated tariffs, the offers offered will allow you to reduce your expenses.

Can I install electricity myself?

Do you want to do your electrical installation work yourself without calling on a professional service provider? It's possible ! However, the domestic electrical circuit must meet safety standards to be scrupulously observed.

It would be dangerous to depart from it.

How much does it cost to connect electricity to a house?

The price of an electrical installation depends on several parameters, including the price of the equipment, the size of the installation and the cost of the electrician.

It is therefore important to inform yourself about these different points.

Electrical renovation is often more expensive than new installation, since it requires specific fittings, and requires the removal of your old equipment. So, keep in mind that the price of an electrical installation is between 80 and 140 € per m² on average.

How to put electricity in a house?

Before putting electricity into service in a new home, it is imperative that it is connected to the electricity distribution network.

Once the connection work has been completed, you must take out an electricity supply contract with the supplier of your choice. It is the latter who will request the commissioning of electricity from enedis

How do I add electricity to my backyard?