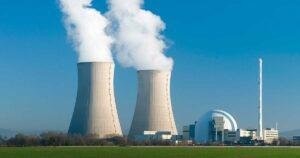 One of the most contentious energy sources we have is nuclear energy. The potential risk of nuclear power is too high for some people. Others see nuclear energy as the key to a world free of carbon emissions. Nuclear energy still accounts for over 20% of the nation’s total energy production despite being a contentious topic.

What’s the process at a nuclear power plant?

Atoms make up all matter. These atoms are made up of a nucleus that the electrons orbit. Protons and neutrons make up the nucleus itself. The fission of heavy atoms, such as uranium, releases thermal energy in a nuclear reactor. By exposing them to neutron bombardment, this is accomplished.

Two or three neutrons are released with each fission. These in turn trigger fresh fissions, setting off a domino effect. It’s crucial to contain this chain reaction in a nuclear reactor. Only a neutron that has been emitted can start a new fission after each one. Therefore, the extra neutrons in the reactor must be absorbed. This is accomplished by incorporating boric acid into the water

How does a nuclear power plant work?

A nuclear power plant with a pressurized water reactor (high pressure reactor) such as at Doel or Tihange has three independent water circuits: A primary circuit, A secondary circui, A tertiary circuit.

The Doel and Tihange nuclear power plants use uranium as fissile material. In nature, uranium exists in 3 forms: 99% uranium-238, 0.7% uranium-235 and a minimal amount of uranium-234.

The nucleus of uranium-235 is fissile, that of uranium-238 is not. The mixture of uranium extracted from the mines is enriched until it contains approximately 4% uranium-235. This is the ideal concentration for a chain reaction. The reactor vessel is a large, thick-walled steel vessel in which fission products are found.

These tanks are filled with small pellets of uranium oxide fissile material. The rods are placed grouped together in the reactor. The heat released during the fission of the uranium nuclei is absorbed by the water in the primary circuit.

This heats up to a very high temperature. The pressurizer keeps everything under high pressure to prevent the water from boiling or steam forming.

Hence the name high pressure reactor. The hot water is then directed to a heat exchanger, a steam generator. It is the cylindrical tank with thousands of inverted U-shaped pipes. The water circulates in these pipes and transmits the heat to the water of the secondary circuit, which circulates outside the pipes.

This water heats up and turns into steam. When the water in the primary circuit has transmitted its heat, a pump sends it back to the reactor. The steam from the steam generators drives one or more steam turbines. These consist of a series of blades mounted on a shaft. Due to the high steam pressure, the shaft rotates very quickly.

The turbine in this way drives an alternator which ultimately produces electricity. Kind of like a bicycle dynamo. Transformers route voltage to the output of the alternator to bring electricity to users with as little loss as possible.

What happens with the steam that comes from the turbines? It goes through a condenser. It is a heat exchanger with thousands of pipes.

This is sent back to the steam generator to heat it again in steam. The heated cooling water is in turn routed to the cooling towers.

It cools there in contact with an upward flow of air. This is the natural stack effect. Most of this water is collected in a basin at the bottom of the cooling tower and returned to the condenser. Only a small part (1.5%) leaves the cooling tower as vapour.

here are no carbon emissions from nuclear power reactors.

Compared to conventional energy sources like fossil fuels, which produce large amounts of carbon dioxide in the environment, this is a big advantage. One of the main contributors to climate change is an excess of carbon dioxide. Therefore, the better an energy source, the lower its carbon and greenhouse gas emissions.

In reality, nuclear energy production prevents 528 million metric tons of carbon dioxide from being discharged into the environment each year, according to the Nuclear Energy Institute (NEI).