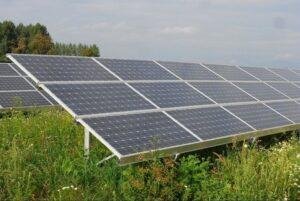 An electric power system that uses photovoltaics to provide usable solar electricity is known as a photovoltaic system, often known as a photovoltaic system or solar power system. It is made up of a combination of several parts, such as solar panels that take in and convert sunlight into power, solar inverters that change the output from direct to alternating current, mounting hardware, wiring, and other electrical components needed to make up a functional system.

It might also have an integrated battery and a solar tracking system to enhance the device’s overall performance.In buildings, we are now witnessing a return to electricity as an energy carrier in various ways.

The use of electric heat pumps as heat generators for air conditioning is increasingly successful: it was only in 2017 that the Italian market reached 2.1 billion euros.

Solar panels are very reliable. Technological developments mean that the panels are more and more resistant and efficient. They are designed to withstand the elements and wear out very slowly. Currently, it is estimated that a well-maintained and correctly installed solar panel can produce electricity for 40 years or more.Investing in a photovoltaic installation therefore remains very profitable, at a time when energy market prices are exploding and when energy independence is a major issue.

This is favored by several concomitant factors such as the need for combined heating and cooling applications, the diffusion of low temperature hydronic heating and cooling systems, the production of electricity distributed by small photovoltaic systems or the appearance on the market for modular electrical storage solutions.

However, electricity does not only mean energy consumption, but also the possibility of distributed generation. First thanks to an incentive system and then thanks to the reduction of component costs, more and more houses have been equipped with a photovoltaic system for the production of electricity. Thus, we are no longer faced with a simple consumer, but with a new profile of user who is both producer and consumer of energy: hence the contemporary term “professional consumer”.

In these buildings, it is natural that we want to make the most of the free solar contribution instead of paid offtake from the electricity network, which will increase with the future distribution of home automation control and management functions and local storage capacities. In this case too, it is useful to measure separately the free energy contributions, coming from the photovoltaic installation, and those, remunerated, coming from the electricity network.

Soon in many buildings there will be charging stations for electric vehicles. On the one hand, this is a need driven by the automotive market, which is increasingly offering electric traction solutions; on the other hand, it is an orientation clearly expressed by the European Union in the latest revision of the EPBD directive.

At the same time, medium and large municipalities and metropolitan areas are announcing restrictions on access to city centers for diesel-powered cars. Charging stations for electric vehicles. what are the requirements of directive 2018/844/EU revision of the directive “For new non-residential buildings and non-residential buildings undergoing significant renovation, with more than ten parking spaces, at least one charging point and channeling infrastructure, i.e.

State of the industry

As photovoltaic panels have been widely available for commercial use since the 1970s, subsequent technological developments have been followed by a decrease in their costs and an increase in their efficiency. It is expected that future advances in thin-film cell technology will be accompanied by a sharp reduction in the production price of photovoltaic modules.

However, given the lower efficiency per cell, the area of thin-film sensors would need to be twice that of a crystal system to produce the same power. On average, the price of photovoltaic modules has decreased by 10% per year for the past 8 years and stands at $4.50 per watt; however, in the absence of subsidies, this option is unlikely to be cost-effective as the main source of electricity for households.

The photovoltaic system, is it right for me?

Before installing a photovoltaic system, one of the main factors to consider is the amount of sunlight in your area, or the amount of solar radiation received per unit area. Figure 8 and Figure 9 are solar maps of Ontario that show the annual energy potential in kilowatt-hours produced per kilowatt of solar panels installed at an inclination equal to the latitude of the site.

Although this option is not yet profitable as the main source of electricity in the absence of significant subsidies, a photovoltaic system can serve as a backup generator. If it is connected to the network, it can produce part of your consumption and reduce the amount of your electricity bill.

Ontario offers a net metering service under which the production of your photovoltaic system (or any other renewable energy source) is subtracted from your total electricity consumption when calculating your bill.