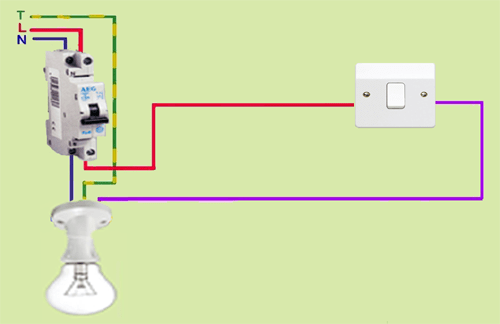 Simple ignition it is a switch type back and forth, even if it is only a simple ignition, the switches are called back and forth because they can perform both functions. One or more light bulbs – also called light point This type of electrical installation is suitable for a room that has a single entrance, such as a bedroom, an office or a cellar.  From the moment that it takes two switch, it is necessary to use a montage back and forth.

Simple electrical ignition is used to turn a point of light on or off from one place in the room (most often at the entrance to the room). It is therefore composed: A typical two-way switch (even if it is only a simple ignition, switches are called a two-way switch because they can perform both functions). One or more light bulbs – also called light points This type of electrical assembly is suitable for a room that has only one entrance, such as a bedroom, an office or even a cellar. As soon as you need two switches, you have to use a two-way switch.

Electrical equipment for a simple ignition

You need: ICTA sheath preferably 16 or 20mm in diameter (you can pass additional wires later if necessary). Electric wire in section 1.5mm²: Neutral: Blue must be. Phase: Preferably red.  Earth (for the light point): mandatory green / yellow. A switch (they’re all coming and going now).  A DCL, luminaire connection device, wall or ceiling according to your choice. Regarding the colors of your electrical wires, if you have any doubts, I invite you to consult my article on color code in electricity. The switch connection for simple ignition assembly This connection is relatively simple since there are two wires that arrive at the switch for simple ignition: The phase which must be plugged into the red or L terminal of the switch.

Simple switch: How to make a simple ignition?

The switch is the most basic way to control an electrical circuit. The connection diagram of an ordinary electrical switch is extremely simple since it consists in interrupting or re-establishing the circuit by acting on one of its electrical wires: the phase conductor.

A domestic electrical installation is made up of a certain number of circuits, made up of two conductors carrying current to points of consumption: light points, sockets or junction box intended for the connection of devices operating on electricity. For this operation, lighting lamps and consuming devices must be supplied by two conductors, with positive current (phase) and negative current (neutral), a third conductor serving for earthing.

Our installations now benefit from a general AC power supply, each conductor being therefore alternately phase or neutral, at a rate of 50 times per second. The role of the switch is to interrupt this current in the circuit concerned by momentarily cutting one of the two wires. By convention, one of the wires is designated as being the phase wire (red, brown, black or any other color except yellow green reserved for the earth or protection conductor) and the other as the neutral wire (blue ). A switch opens the circuit when it interrupts the flow of current, it closes it when it restores it (for example to turn on or off a light).

When installing a switch, the basic action of any electrician, it is always advisable to change the color of the conductor insulation when the switch is passed (here, we have gone from red to brown). The switch always acts on the phase wire and never on the neutral as shown on the circuit diagram of the switch. On a flexible cable, the break can be unipolar (single-wire) or bipolar (on both wires). In an electrical installation, a switch can be recessed or screw on surface. The connection to the conductors is made by terminals (comparable to those of a domino). A voltage tester is used to check the correct functioning of the device.

There are many types of switch other than the well-known simple rocker switch for controlling lighting: time delay switch, twilight switch, differential switch, dimmer switch, etc. First of all, you have to draw an electrical diagram of the lighting to best determine where and how to install and connect a switch. Installing a switch is easy. They all operate on the same principle of connection and wiring as the single switch. The different variants are explained on our electrical diagrams of the house.

A switch can only be used to control a circuit from a single point, unlike the switch, an evolution of the switch, which allows, for example, to control lighting from two distinct points (thus from both ends of the switch). ‘a corridor). Installing and wiring a two-way switch is slightly more complex in this case.

Strictly speaking, these are not switches since their role is to close a circuit which is normally open (without passing an electric current): their purpose is to transmit an impulse (with a remote control switch or a timer, for example) or to establish a more or less prolonged contact (doorbell, for example).

The divisional differential switch is a device installed on the switchboard (after the electric meter), at the head of the circuit, the role of which is to protect the installation and its users in the event of contact with metal elements. an electrical device and one of the wires in the circuit causing a short circuit. It automatically cuts off the power to the electrical circuit concerned when the intensity of the current is different between the two wires of the circuit. It can also play the classic role of any switch: cut the current manually at the switchboard, thus making it possible to intervene on the components and devices connected to the circuit without having to make a general cut at the subscriber’s circuit breaker.

In the context of energy savings, automated switches have been developed which react to movements by emission of infrared rays. They are particularly useful in rooms of occasional use (toilets, corridors, for example) with a single light control.

Thermostat
The thermostat is a switch that reacts according to the temperature. It is therefore particularly suitable for controlling heating devices. It can be associated directly with the device or deported.